A little girl never forgets the day when her parents bring home the family’s first puppy. I still remember it vividly, though for us, it wasn’t quite the gleeful family bonding experience you might expect.

One summer weekend when I was about five, my mom had spent the afternoon garage sale hopping with friends, not looking for anything in particular, just wandering around the suburbs seeing what hidden treasures or downright deals they might happen upon. For my mom, the deal she couldn’t pass up unexpectedly turned out to be an eight-week-old, half Lhasa Apso, half Poodle puppy, wiggling around in a playpen with his littermates. My mom asked if the puppies were for sale, and it turns out they were, for the bargain price of $100. She haggled down to $75, and we had ourselves a discount dog.

When my mom came home, she called for me and my dad to come to the door, and the first thing I noticed was the big, guilty grin on her face. The second thing I noticed was the ball of fluff squirming around in her arms. Just then, she plopped the puppy down on the carpet and let him scamper sideways around the living room, yipping and chasing me in circles, hopping at my ankles, attacking me with puppy kisses. My five-year-old heart basically exploded. I, of course, was instantly in love. My dad on the other hand, stood with his arms crossed in the middle of the room, a rare look of surprise in his eyes, watching straight-faced as his daughter and this fluffy little maniac spazzed out in every possible direction. 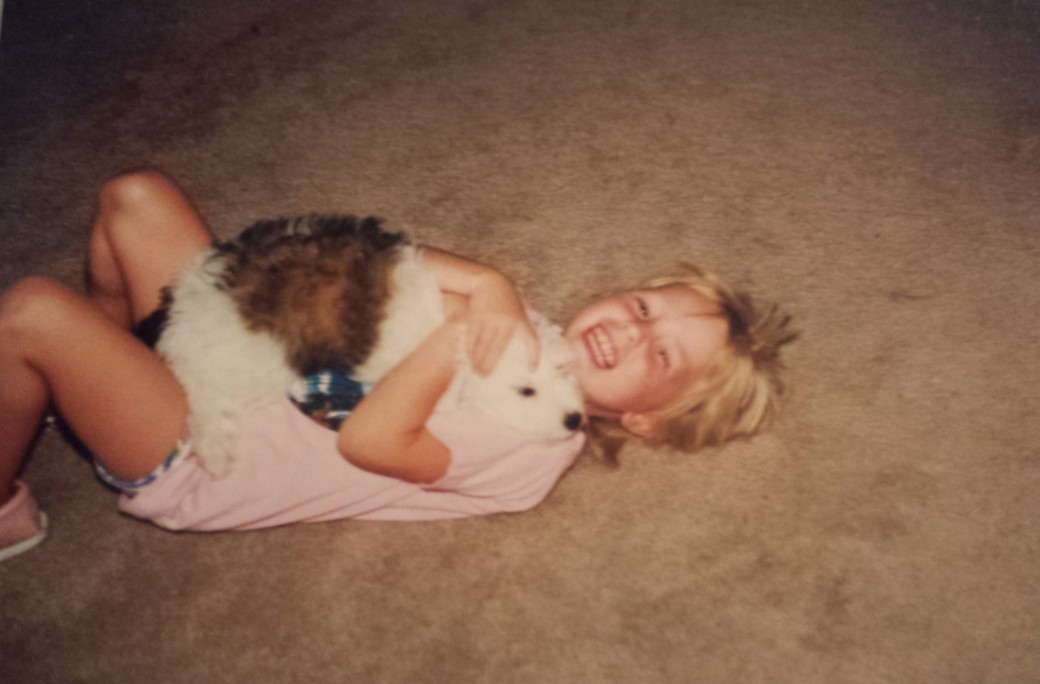 Before my dad could object or even ask my mom what was happening, I excitedly, between hysterical breaths, at an octave bordering on only being audible to the puppy, squealed the words I’m sure my dad was dreading:

I didn’t realize what a brilliant move it was at the time, but my mom knew exactly what she was doing by bringing a puppy home to play with their five-year-old daughter, without discussing it with her husband first. It left my dad with two options: 1) Make his only daughter bawl her eyes out and always be the guy who took away her first puppy, or 2) Reluctantly welcome this ridiculous little furball into our family.

It wasn’t that my dad didn’t like dogs, or even that he didn’t want one, it was that he wasn’t in on the gag from the beginning. This was a man who prided himself on always being at least one step ahead of everyone and setting other people up for laughs, and here he was, finding himself on the other side of a surprise.

The other issue was that not only did my mom bring home a puppy, she picked quite possibly the wimpiest looking puppy of all time. You couldn’t even see his eyes because they were covered by a shaggy mess of matted, white-and-brown fur. His bark, if you could call it that, sounded like a squeaky toy. If you combined the breeds he was made up of, you’d realize pretty quickly that what you had was a Lhasa-Poo – dangerously close to Lots-a-Poo – which is essentially all my dad saw when he looked at him. Imagining having to take this thing out in public on walks around the neighborhood, or come clean when curious strangers asked what breed he was, my dad was not amused.

After what seemed like the longest, tensest silence of my whole childhood, my dad finally looked directly at my mom and said calmly, “Sure, we can keep him. On one condition.”

Suddenly it was my mom’s turn to panic. At this point, she had known my dad for about ten years, and anyone who knew my dad for even ten minutes knew that turning over total control to him was risky. But she also knew that she could either blindly agree, or bring the puppy back to the playpen. So she conceded, without even knowing the conditions of the agreement, and all of our attention shifted back to my dad:

It was worse than either of us thought. By the end of preschool, I was starting to figure out how my dad’s brain worked, and I knew this was a case where we would all end up humiliated somehow. My mom burst out laughing, coming to much the same realization as I had, but also knowing that though potentially humiliating – letting my dad name the dog would also be relatively harmless. Probably.

We tried to offer suggestions as a way to curb some of my dad’s spiteful creativity, but it was no use. He took his time, circling the puppy completely straightfaced, sizing him up, trying to figure out the most outrageous name possible for this pathetic little mutt. He threw out some ideas that if I had repeated out loud, I’m pretty sure I’d have had my mouth washed out with soap. My mom just shook her head and choked down her laughter, trying not to encourage him, knowing that in the end, it wasn’t going to be up to her anyway. All she could do was hope for a name that wouldn’t require her to shout expletives from the back door every time she wanted the dog to come back inside, giving the neighbors what little remaining evidence they needed to prove we were nuts.

Finally, after what seemed like hours of a standoff, my dad smiled smugly and said, with complete certainty: “Divot.”

Divot? Seriously? I didn’t even know what that meant at the time, but I knew it was bad. I flashed forward throughout my childhood, envisioning having to sheepishly tell my friends my dog’s name, without any good explanation for why he was called that. When I asked what it meant, my dad explained that a divot was a clump of turf or grass, usually on a golf course. He went on, explaining that a divot was mostly useless, kind of a nuisance, and often an eyesore, exactly what this dog was to my dad at that point. He was a tiny, insignificant, clump of fur that other people had to clean up after. To him, it made complete sense, plus my mom and I both hated it – at least at first – so he had won.

What came to pass might seem predictable if you knew my dad and how big-hearted he actually was, but of course, Divot ended up loving my dad the most out of all of us. And eventually, though he never would have admitted it, my dad developed a soft spot for him too.